The Day Will Come...

The only truth is there is no truth; there are only stories. You cannot find truth in words or concepts.  These only represent you and the world; they are not you or the world.  Even scientific truths are only convenient fictions, which if acted upon can create miracles.
Almost nothing in physics that was considered truth in 1903 is considered true now. Einstein changed everything with his two theories of relativity and his paper on the Brownian Movement.  All of nineteenth-century science may be considered a special limited case of more general truths.
Yet, we can consider scientific truths to be convenient fictions, meaning they can produce results unobtainable without the stories. And for some strange reason, no one can explain, certain aspects of our experiential reality are explainable and made predictable using mathematical expressions. More generally, we can say some well-defined abstract properties of experiential matter obey rules of logic.  I guess we would expect that the actions necessary for survival worked in left-brained logical ways.
But the mind works in other ways also, the so-called right-brained ways of poetry, word-smithing, story-telling, song, etc., that elicit emotional and energetic responses which in mostly unconscious ways control ours’ and others’ behaviors.
Dhyanyogi’s kundalini chanting can have an enormous energetic impact on some listeners and even animals.  Robert’s monotonic expression of his version of Advaitic truth had a calming and mesmerizing effect on his audience and induced various sorts of awakenings in his listeners. 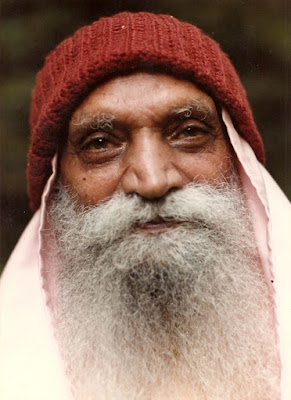 So too, the energetically generated words between two devoted and surrendered lovers can generate ecstasies and altered energetic states in each other.  The words they say seemingly come not from their minds, but spontaneously flow out of no-where and work their magic on the other.  Enthralled, they stare at each other in completely self-surrendered love and dwell in complete ecstasy or whole body orgasms that are only slightly sexual in their composition.
I can imagine a guru of the future having mastered the words and stories to produce mass ecstasies in his or her Satsangs, and if over television, massive psychological healings and spiritual ecstasies that will change the world.  It is teachers like this that my life is dedicated to producing, who use words of love, surrender, and embodied bliss that can move the world.
Posted by Ed Muzika at 10:18 AM