The New Spirituality Sheds Old Concepts and is Raw

There are many teachers who are essentially salesmen.  They may have some true teachings, but their intent is to build a following.  Therefore, they want to alienate no one and attract everyone.  They are politically correct.  They say no evil.  They are very polite using high-minded terms and speaking of an elevated morality when they know that the true teachings have nothing to do with morality or high-minded terms.  They are all sweetness and light on the surface, but hide their darkness below fine clothes, flowers and rituals.  This is the type of guru that people invite home to dinner with family.  He is acceptable to nearly everyone.

But there is another kind of teacher, like Nisargadatta.  Nisargadatta said that his way is to shake people up, to offend their sensibilities, to shock them so that they look at their concepts and wonder if they are true.  He is a shocker, a revolutionary, an insurgent, and in a sense a murderer of the concepts of who you think you are.  No one will invite this kind of guru to the family dinner because he is not acceptable to polite society and will be very disruptive.  There is a great deal of breaking energy with this type of guru.

Let me just say that very few students invite me to the family dinner.  So many spiritual students want just sweetness and light, and want no disruptive forces or darkness, which they consider as bad or not elevating.

Let me put all of spirituality and make it very simple for you.  There are a billion steps I will leave out before you can arrive at this truth for yourself.  But here it is:

First, through meditation and self-inquiry into the feeling sense of I am, one gets to know emptiness, also known as the Great Void.  And there you need to dwell for some time becoming fully aware of both the void and that which witnesses the void, the subject, the unchanging absolute within, also known as Nothingness.

Then begins the return into the body and becoming aware of the subtle body, the energy body, and most importantly love and sex.

This is where things begin to get messy, because the energy body is very complicated and subtle.  But spirituality at this point is basically about love and sex, because the heart chakra and the root chakra of sexuality are the primary energies pervading everyone’s life and society.

For the popular guru, sexuality is to be kept under wraps, and spoken of in very roundabout ways such as the man must love the essence of women as embodiments of Ma Kali, while women must worship men as embodiments of Shiva.  But this is just a polite way of saying that the essence of men worships the essence of women and vice versa.  There is a strong pull, a huge attraction between the two sexes and their essences.  But no one wants to speak about the sex because that is hidden behind find words about Shiva, Kali, and worshiping of God.

But the truth is every human is an incarnation of one aspect of God, which I call the Life Force, which Robert called the power that knows the way, which is basically how life manifests itself in the world, forms relations, and creates each person’s destiny and genetics.  This same life force can be directly felt as a separate body within an about your physical body.  Some refer to this as the subtle body, or as one’s sense of presence.  It is a direct awareness of subtle energies associated with your physical body but separate from it, and in this sense, is more you than your physical body or mind.  It is more intimate than either.  It is more powerful than either.  It is where your true life lies, and where the life force manifest through you.

This subtle body has many centers which may be referred to as chakras.  Some systems posit seven chakras some 13.  But there are many more than that.  However, some of the most important energy complexes are associated with one sex organs and sexuality, the hara, or low belly, where once physical power originates from as well as will and sustaining effort, then there is the heart chakra, which when opened completely bursts and explodes in love, devotion, worship and surrender.  The feeling is one has become totally empty of body and mind, and is released into the pure space of devotion and submission to God’s will.

The next most important chakra is the third eye, an inch above the physical eyes in between them, and an inch into your skull.  Opening of this Chuck reveals the light of consciousness, which pervades the subtle body and soaks it in light, as well as pervades the innerspace one experiences as the void.

However, spirituality at this level is all about the relationship between the sexes, between men and women and the way to realize the life force through love, devotion, worship, and sexuality.  These two centers together, the sexual center reinforces and strengthens the bonding of the heart center opening.  Or is one of my close students once said, “It is all about sexuality is not it?”  Well, it was for her at the time she said it, but it is about a combination of openhearted love exploding inside your soul, in combination with the sexual energy which provides the bond between two people in love.  When these are combined perfectly so that they are a unity, you have realized God as the life force and as you.  In a sense, you become God by identifying with the life force instead of with your body, or your mind. 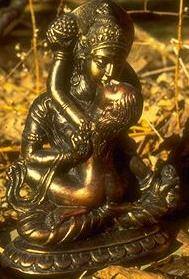 But because of societies burying sexuality under taboos of speaking or doing, very few teachers can express this truth directly and openly, and instead bury this truth under flowery Hindu or New Age concepts that hide the rawness of the power of the erupted heart combined with erupted sexuality.  Or else they hide their relationships with students regarding their teachings and practice of sexuality.  Thus arise all the scandals about gurus having sex with their male and female students. The rawness and the power is unbelievable, and therefore it is kept under wraps because of the destruction it can possibly cause unless guided carefully.

Let me also say, that it is not necessary to actually engage in physical sex with another, but it is necessary to feel these energies and combine them with one's heart energy.  But it is all about relationship, not being lost only in yourself.
Posted by Ed Muzika at 10:09 AM