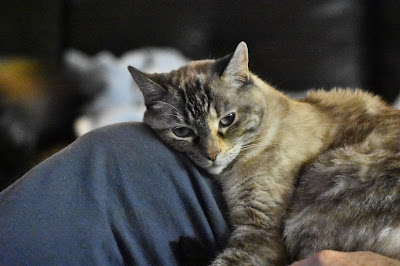 She is in post-op now. About 98% of the tumor was removed along the entire left lobe of her liver. The tumor and a sample from an enlarged lymph node will be sent out to determine if the tumor is malignant. The surgeon said the chances are about 50-50. If it is, then she will get chemotherapy.

Her body temperature is a little low postop, which worries me, because that also occurred with Gopi, my beloved cat 10 years ago post surgery for a mass in her lower intestine. She never awakened after surgery, and had a stroke or heart attack about four hours after surgery.

I am quite concerned that the surgeon now estimated about a 50-50 chance for a malignancy which would require chemotherapy. If it is a local tumor only, because hundred percent is not removed, it could begin to regrow, but she would likely outlive the regrowing tumor.

I am not much relieved by the news, mainly because she is away from home in a strange place for the next day or two. She has never been away from home before for more than an hour or two going to a veterinarian.
Posted by Ed Muzika at 11:33 AM