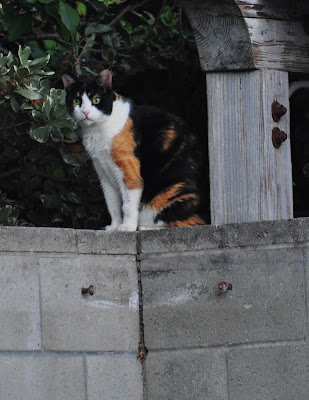 OUR DEAR, DEAR KATIE DIED YESTERDAY AFTER A SIX WEEK ILLNESS. I AM HEARTBROKEN.  I WATCHED HER SPIRIT LEAVE HER BODY YESTERDAY AT 3 PM AT HER VET’S OFFICE.


She had received extensive treatment including multiple bood tests, X-rays, fluid therapy, multiple courses of anti-biotics and iron support supplements, as well as being syringe fed for the last five days.  He 3 vets were mystified.  The X-rays appeared to reveal pneumonia treated by three different antibiotics, but she continued to go down hill.  Her blood values were all normal, including kidney, except for an increasingly severe anemia treated by iron supplements.

The vet said her could not help her any more after the last antibiotic failed.  So I got all of her medical records to take to a recommended specialist, who I called the day before yesterday. I talked to a technician there and the doctor over the phone who asked many questions.  After I read her Katies blood values and recent medical history, she was very pessimistic, saying she is gravely ill.  I was to take her the next day (yesterday) to begin treatment, but when I awoke yesterday, Katie was much worse and was gasping for breath.  I knew it was too late.  She was too weak and now appeared frightened by her inability to breath.

So yesterday at 3 pm. We took her to Grand Paws and put her to sleep.  They had a room prepared, with a thick blanket for Katie, and tissues for Kerima. As  per usual, the staff was wonderful, sympathetic, compassionate, and the euthanasia passed without incident, and both Kerima and I cried. 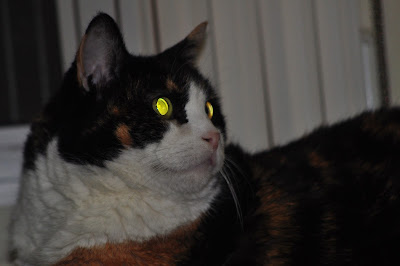 Watching her spirit leave her body, it was painfully aware that Katie  was her spirit and not her body, and that under anesthetic, consciousness left first, and with it her suffering, and then after the Euthenal was administered, her life force left and her body stilled.  Katie was entirely gone.  A brief flash of life and vitality that brought others and us joy for 16 years. This made me appreciate even more my temporality and present consciousness, and to actually worship it in myself and in others.


Some of these attached photos show Katie playing with her eight children—cloth dolls.  She often stood above one or more of them, and strongly lectured them about some misdeed of their’s.  She was a tough-love mother, always likely being surrounded by her children, and playing with them loudly in some other room than the one we were in. 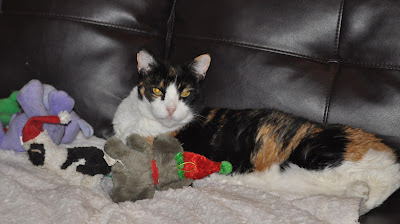 God bless and keep you Katie!  I love you!