Kali has an extremely rare and very aggressive type of cancer known as chloangiosarcoma growing out of the bile ducts in her liver. The usual lifespan after diagnosis is one to six months.  The mass was surgically removed along with the left lobe of her liver on Match 26, with a 99% success. But there were cancer cells seen to the margin which abutted the main liver artery. 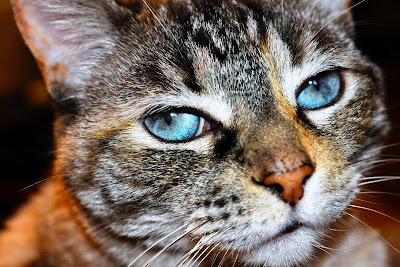 Kali responded very well to surgery, and within a week was running around, jumping and climbing like a kitten.  She ate well too and gained weight.

After a consult with her oncologist, Kali had her first chemotherapy session on April 23, where she was given carboplatin which she tolerated well  until she developed signs of a urinary infection a week later, likely due to repressed immune system from the chemo.

Actually, I was surprised the oncologist recommended because the research I did prior to our appointment indicated chemo was largely, if not entirely ineffective on this form of cancer, but chemo treatment was the only topic she raised.

After we got Kali home I did more research and found that carboplatin showed some ability to slow the cancer in only 17 to 36% in humans, with no studies indicating effectiveness in cats.  I eventually found three studies that said treatment showed it was totally ineffective at slowing the cancer or prolonging her life. 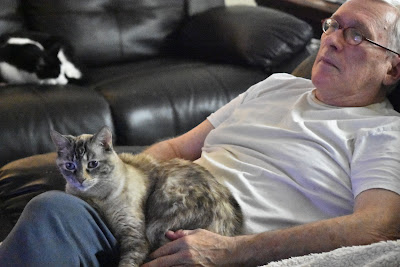 So, two days ago we attempted to contact our former holistic vet who treated our cat Sweetie, who lived 14 months beyond her expected death time.  We are awaiting consult.

I know many people have recommended CBD oil, but all beneficial claims are all anecdotal—individuals claiming success without mentioning the failures of the oil.  There are absolutely no studies on the effectiveness of CBD oil on treating chloangiosarcoma either in humans or animals.  I am sure none will be available on any treatment Dr. Pasternak suggests either, but at least his suggestions will flow from 25 years of treating cancers in dogs and cats. 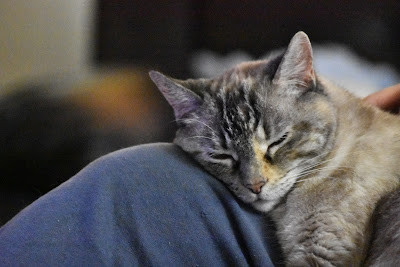 I have to say Kali has never been more affectionate and loving than now.  All the weird symptoms of anxiety she had displayed are gone.  The only meds she is taking now is to help bring down her high liver enzyme levels.

Kali is one of the most loved cats ever treated at Midwestern University where she had her surgery and chemo.  Everyone loved her and played with her, and remarking how loving and playful she was.

Kerima and I are both depressed.  This is the first time I have really felt depression in 22 years since my cat Gopi died, also of cancer.  I also feel entirely lonely in this, and almost entirely mundane.  The feeling inside myself where I usually met God, the life force, has changed. Usually it feels like a heart joining with white light and a friendly, gentle energy.

Now it is no longer white, and is a swollen gray, with an entirely depressed inner feeling. I am surprised that God can be sad also.

I would have more new photos of Kali. But since we moved, I cannot find ANY of my photo equipment.  I only have an iPad now for photos.