I call Bodhi my second guru because he always seems as gentle and empty as Robert Adams.  He was born a couple of months after Robert died in early 1997, so he is 16-1/2 years old now.

The photo below was taken in 1999 when he was two years old. Bodhi was huge, a good 16 lbs or more, and affectionate, and very gentle. 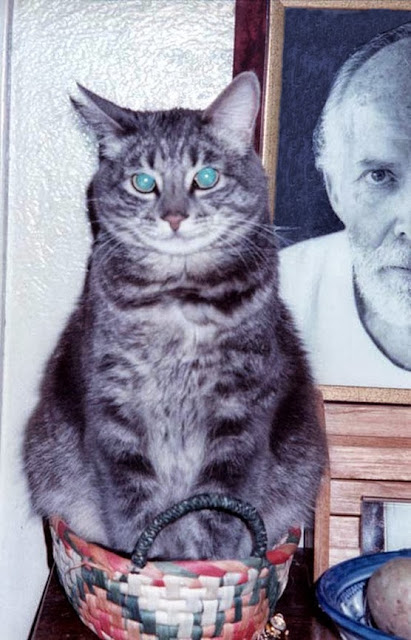 Here he is next to Robert's photo. Notice the intense stare in both.

About a year ago I took him to our Vet, Dan Reimer at Adler Vet Hospital for eating problems and losing weight.

Blood and urine testing revealed mild but progressive kidney failure. I have had five cats die of kidney failure during the past 20 years, and all but one died within six months of diagnosis.  The other lived 2-1/2 years.

Two weeks ago I took Bodhi for followup testing, as it had been about a year.  Bodhi seemed stable during this year, and I had been giving him SQ fluids (fluids under the skin), and more recently aluminum hydroxide in case he had elevated phosphorous in his blood.

During the past year, Bodhi has taken to lying on my chest, and I had started "running energy" through him, both in a positive fashion of pushing, but also in a passive, yin way, inviting him to harmonize with me. Techniques I knew instinctively, but which were validated by Deeya who is perhaps Quantum Touch's leading instructor.

This is Bodhi 2 months ago

I saw the lab results today: There was absolutely no signs of kidney failure either in the blood test results or in the urinanalysis!!!

These are extraordinary results as kidney failure is progressive and always fatal unless something else kills the cat first.

Of the 41 blood items measured, only two were elevated: amalase and neutrophils, a type of white blood cell that can be caused by inflammtion, stress, and a few other problems.  The elevated amalase is indicative of some level of pancreatitis.  The elevations on each of these items was only about 5% above normal, and no treatment was suggested.

Now Bodhi also has stomatitis, an inflammtion of the gums, for which his teeth were extracted five years ago as part of a standard treatment protocol, and this could explain the neutrophil elevation.  This condition too is now under control also, and no additional treatment was suggested because treatment involves steroids, which Dr. Reimer wanted to reserve as a last resort measure for the future.

The kidney specific tests for BUN and Creatinine were both slightly elevated mid-range normal.

Cats with kidney disease drink a lot of water because the kidneys are failing to detoxify the blood and more water helps  the weakened  kidneys to flush better.

Yet every one of Bodhi's ten urine functions fell in the normal range.

All in all, the results are extraordinary and makes one wonder whether energy work on animals can really work, or Bodhi just spontaneously compensated for his lost kidney function that had been seriously manifest eleven months ago.

Also, energy work had failed with Lakshmi, my cancer kitty about seven months ago.